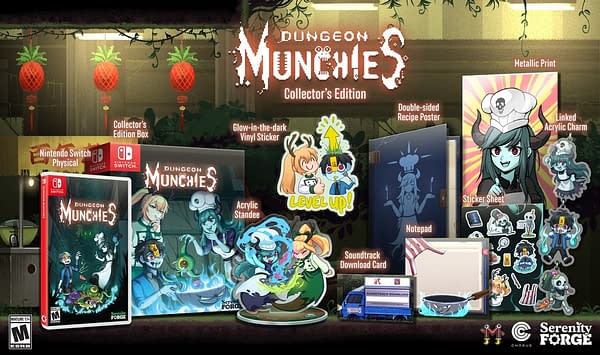 Serenity Forge rolled out another physical edition for a game this past week as Dungeon Munchies will be getting the Collector’s treatment. The PC title from developer MaJAJa will be making its way over to consoles on October 28th as we’ll see it released for the Nintendo Switch, as well as the PS4 and PS5. But to mark the occasion, there will be a standard Physical Edition of the game, as well as a Collector’s Edition for you to snag if you wish. Both of which we have the details of below as the Standard will be going for $35 and the Collector’s will be going for $80. These two will also be released Europe, but a date has not been finalized for that as of when this is being written.

Dungeon Munchies, rated a full 10/10 with thousands of reviews on Steam, is a side-scrolling action RPG with a focus on hunting down an array of different creatures, cooking them up and eating them – with each dish giving you a different type of power-up. The combination of dishes you choose to eat will impact your entire playstyle. You’re only one revived, undead human though, you aren’t magic – you only have room for seven different dishes, so make sure to choose dishes that reflect the playstyle you want, and get out into the dungeon to find new ingredients to cook up. The Physical Edition of Dungeon Munchies, which retails for $34.99, packs in the flavor with all of the below extras.

However, the Collector’s Edition, priced at $79.99, holds the true secret ingredients, containing all of the above along with: