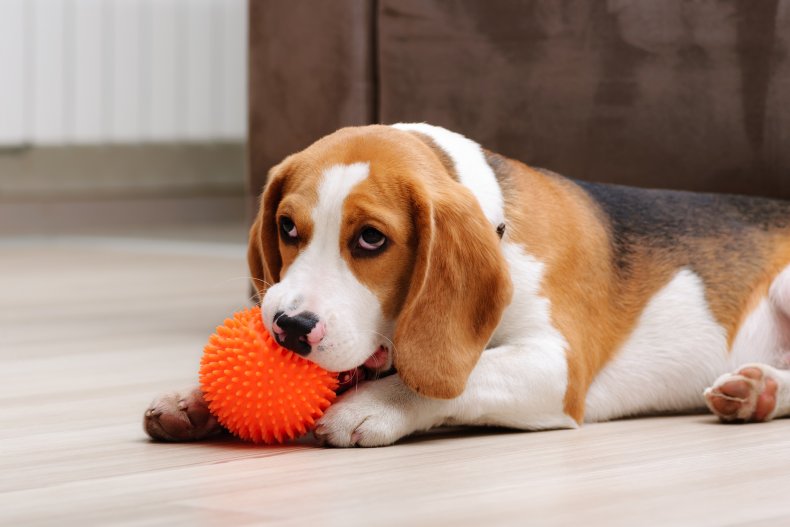 Whether splashing around in the bath or tasting a Puppuccino, is there anything cuter than a puppy experiencing something new for the first time?

A puppy discovering that squeaky toys exist has charmed the internet, with Reddit users describing the video as “a very important moment” in the dog’s life.

Posting to the r/rarepuppers forum on Friday, June 17, user u/sympleton shared a clip of his puppy Latte and her adorable reaction to her first squeaky toy.

In the video, Latte can be seen tentatively biting into the yellow ball, before going wild after realizing it makes a noise.

Users couldn’t get enough of Latte’s over-the-top response, with the post receiving over 21,000 upvotes and more than 100 comments.

“Oh my gosh. How sweet is that,” said fefififum23.

“That is one of the cutest pups I have ever seen,” commented noobpwner314.

Researchers at the University of Bristol Veterinary School are currently undertaking a study on canine attachment and why dogs love some toys more than others. Inspired by research on children and their attachment to soft toys and blankets, the study hopes to uncover why many dogs display similar behavior when they find an object they like.

Described by Emily Blackwell—director of Companion Animal Population Health at the veterinary school—as “the first large-scale systematic survey of the phenomenon,” researchers hope the study will provide insights into the evolution of social behavior in both dogs and humans.

An earlier study conducted by the university in 2012 claimed to have found the formula for the “perfect dog toy.” A trait attributed to their wolf ancestors, researchers found that dogs prefer toys that can be eaten or ripped to shreds, like a wolf attacking its prey.

Sympleton—whose real name is Kendrew—told Newsweek that Latte is a mixed breed puppy born to a rescued reservation dog at the Toronto Humane Society. She will be a year old in August, and has “eviscerated” many squeaky toys in the last six months, but not her first one.

“She’s very delicate when she plays with the little yellow ball that she fell in love with in the video,” he said.

Although users unanimously agree that Latte is adorable, many warned Kendrew that peace and quiet is now a thing of the past.

“You will regret that in years to come,” said Woodysbackinpa. “Sooo adorable though.”

“You will find out the true nature of squeaky toys at 3 in the morning,” joked Lone_Wanderer97.

“And so it begins,” warned BellerophonM.

Others shared their own stories of squeaky toy-related regret.

MountainGoat84 wrote: “My dog loves his squeaky balls and goes HAM on them on a regular basis.

“They are so freaking loud and annoying, but they make him very happy.

“So to summarize, we watch TV with the subtitles on now.”

Cheap-Substance8771 commented: “We’d literally sit down for dinner or turn the lights off and sit down with our popcorn ready for a movie and …”Squeak! Squeak! Squeak!”

“He would run to us asking to play tug-of-war while maintaining the squeaks. It was so dang annoying that he had such horrible timing.

“I realize now that it was just because it was the first time all day his family was all in one room and he just assumed we were there for him. I miss his annoying squeaks now.”

However, Kendrew explained that he hides the toys at bedtime, when Latte prefers to “settle down with a stuffed bunny.”