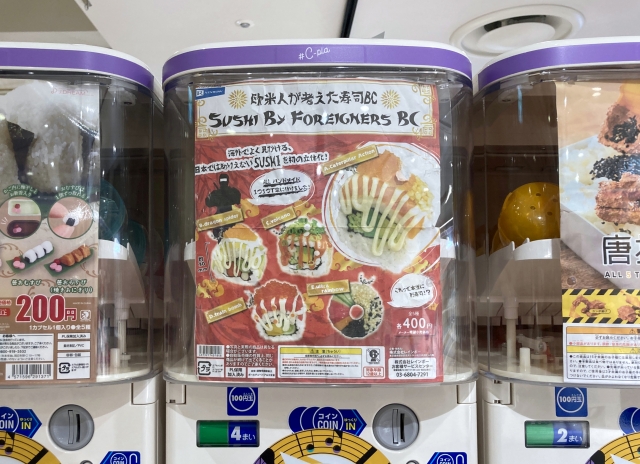 Have you ever heard of these sushi before?!?

The world of capsule toys never ceases to amaze, making the unthinkable a reality with collections that include photos of random strangers, origami folded by gyaru, and animals apologising for their bad behaviour at press conferences.

Our reporter Mr Sato always likes to be on top of these obscure new releases, but one gacha capsule toy range remained frustratingly beyond his grasp, eluding him since its release in October last year.

So, after ten months of searching, it was a glorious day when Mr Sato finally laid eyes on the gacha he’d been seeking.

That’s right — Mr Sato had long been looking for Sushi By Foreigners BC, a collection so bizarre and hard to find it seemed apt that there was a ninja on the promo poster, saying:

▼ “I made each one ALL handmade carefully!”

To explain what was inside the machine, the poster also read: “Often seen overseas, unheard of in Japan SUSHI become 3-D objects for the first time!”

Mr Sato wasted no time inserting the required 400 yen (US$2.93) into the machine to make a purchase, and after buying one he couldn’t resist using the rest of his coins at the machine, eventually returning home with three capsules.

▼ The pamphlet included inside each capsule showed the five sushi in the collection, with names Mr Sato had never heard of before.

In keeping with the international theme, the capsules were made in Thailand, and curiously, they were said to be “suitable for people over 12 years of age”.

Mr Sato might act like a child a lot of the time, but he’s certainly old enough to handle the Sushi By Foreigners BC…hopefully. So which of these “unheard of in Japan” sushi was Mr Sato now the proud owner of?

The first one he opened was the Dragon Spider. Unfortunately, the salmon roe that was meant to be attached to the top seemed to have fallen off, which added to the craziness that was going on here.

▼ No dragons, no spiders, but a whole lot of mayonnaise.

The second was the Caterpillar Action, which looked to be a sushi roll filled with avocado and green onions.

Mr Sato’s third and final sushi was the Volcano, which looked to be a California roll slathered in…chilli sauce?

As Mr Sato inspected his purchases, he realised he could’ve bought a platter of edible sushi for the same price as these inedible ones. Still, these types of sushi are unheard of in Japan, so he decided to bask in the knowledge that he was in possession of a rare commodity in the sushi world.

▼ The attention to detail was impressive, with individual grains visible in each piece of sushi.

Look at the green onions on top of the Volcano! The way they were haphazardly arranged, along with the white, green, and pale-green hues, made them seem very realistic.

▼ A couple of green onion slices had also “fallen” off the topping, adding to the realism.

While the concept behind the collection initially seemed bizarre, now that he was holding the hard-to-find sushi in his hands, Mr Sato was more impressed with the finely crafted nature of the items.

He still had two to collect, though, so Mr Sato will definitely be making a return to try his luck at the machine again, and he’ll also be spending some money on another machine he saw while he was there.

Mr Sato thought he’d seen it all when he encountered these preposterous “adult” gacha toys at Akihabara Station last year, but as it turns out, it was all pretty tame in comparison to the collections out now. The world of Japanese gacha capsule toys truly knows no bounds!