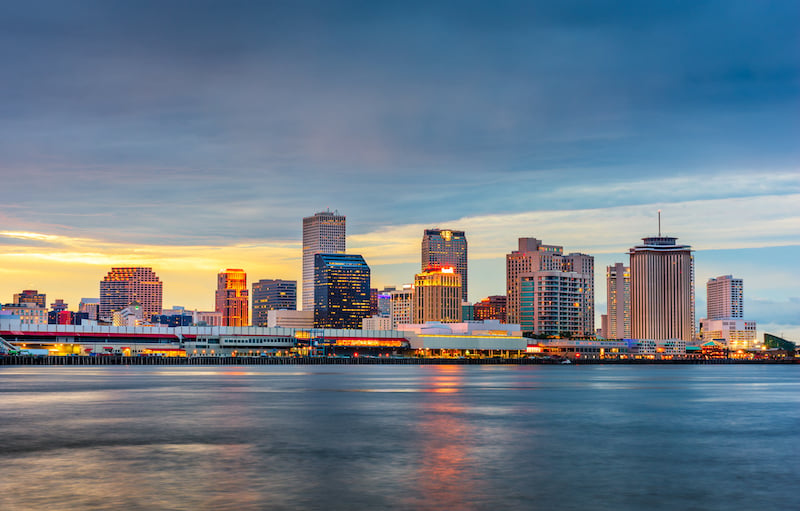 NEW ORLEANS — National real estate investment firm RockStep Capital recently completed the acquisition of The Outlet Collection at Riverwalk from Howard Hughes Corporation. Based in Houston, RockStep said it plans to add high-end retailers, expand dining options, and continue the development of the adjacent Spanish Plaza. First opened in 1986, the Riverwalk runs along the Mississippi River from the New Orleans Ernest N. Morial Convention Center to Spanish Plaza.  RockStep said it has secured local investors who are committed to the “revitalization of this iconic riverfront development in New Orleans.” “Drawing upon our experience and strategies managing a portfolio of 22 malls and shopping centers, we’re excited to make our mark on New Orleans and breathe new life into the Riverwalk,” says RockStep Capital President Andy Weiner in a press release. “We have an incredible team of local partners to help us make the necessary improvements to ensure the mall remains the premier outlet shopping destination in downtown New Orleans.”

SVN | Urban Properties — a commercial brokerage, property management and development firm — recently completed a renovation at 619 N. Causeway Boulevard that transformed half of a former Winn Dixie into Altitude Trampoline Park, a 30,000-square-foot entertainment center that opened on July 22. The park includes more than 10,000 square feet of trampoline area, a multi-sport court, two golf simulators, a kids’ play area, four party rooms, and a small restaurant and bar. The Dimension Group, based in Dallas, led the design. Mandeville-based DonahueFavret Contractors handled the construction.

The Louisiana River Parishes Tourist Commission and American Cruise Lines have announced a partnership that means there will be a River Parishes stop for some of the company’s Louisiana voyages. Officials expect there to be roughly 40 visits to the area each year by ships that will dock at a port owned by the Port of South Louisiana in St. James Parish. The first ship to make the stop was the American Heritage. Tourism boosters are celebrating the move, which should bring increased visibility and visitation to the area after the economic setbacks caused by the pandemic and Hurricane Ida. American Cruise Lines, based in Connecticut, operates cruises on the Mississippi River that run between Minneapolis, New Orleans and many points in between. Vessels can accommodate nearly 200 passengers. In total, the company oversees 35-plus itineraries in the Pacific Northwest, Alaska, New England, the southeast and the Mississippi River region.

Two of the founders of Waitr, the meal delivery app, have joined the product development team at BoomNation, a new mobile app community connecting tradespeople with employers. Addison Killebrew and Manuel Rivero Ramirez are reuniting with fellow Waitr founder and current BoomNation Chairman and Co-CEO Chris Meaux. Killebrew is coming onboard as chief operating officer, while Rivero Ramirez will oversee architecture and engineering as chief technology officer. “BoomNation fills a void for the skilled workforce that no one has been able to address before,” said Killebrew in a press release. “It’s exciting to be part of this new app community and have the opportunity to expand its functionality for the millions of tradespeople across the country.”

The Rusovich Foundation has announced a direct $100,000 donation to the Youth Empowerment Project as part of the NOLA Coalition’s pledge to raise $5 million per year for youth services over three years for a total of $15 million invested in high-impact New Orleans nonprofits. This support is in response to the coalition’s pledge to invest in positive generational change for young people in New Orleans. “We are pleased to provide the Youth Empowerment Project with this contribution,” said Greg and Suzanne Rusovich. “They are one of the premier organizations working with kids ages seven-to-25 in neighborhoods throughout our community. They support and empower these kids to reach their potential and realize their dreams. And this comes at a perfect time as YEP is expanding to New Orleans East. We were inspired by the recent call to action put out by the NOLA Coalition and encourage others to join us in this call to action for our future – our children.”

Lendmark Financial Services, a provider of household credit and consumer loans, has opened new branches at 3301 Severn Avenue in Metairie and 2112 Belle Chasse Highway in Terrytown. Each location expects to serve between 500 and 600 customers in the first year of operation via in-person customer service and digital offerings. Dionca Sorina will serve as branch manager in Metairie and Whit Hewitt will lead the Terrytown office. Other Louisiana branches are located in Slidell, Baton Rouge, Lafayette, Hammond and Shreveport.